Curt Anderson a US singer songwriter recently dropped into our studios and performed his current top ten single “Keep Me Falling”. He has previously topped the charts with “Keep it Beating” which he also performed live to air. Anderson released his debut album “Every Moment” in 2016 and at the end of March the Deluxe version with four new songs will be released. 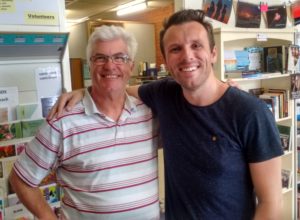