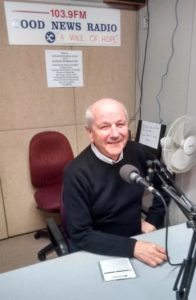 We at Good News Radio would like to add our congratulations to all the local people who received Queen’s Birthday honors; especially Frank Clark and Graeme Kent who were recently interviewed on Monday Morning Matters. Both men told of their amazing experiences, their families and inspirational work that has led to their awards. Frank Clark (OAM), a well known voice in Ballarat was one of a number of local people who received Queens Birthday honors. He was awarded the the Order of Australia medal (OAM) for his 45 years teaching at the Ewing House School for the Deaf children, his work at 3BA as on radio presenter, the host of Ballarat Carols and many other aspects including his involvement in the local church. Speaking on Monday Morning Matters recently Frank told listeners of how humbling it has been to receive the award.The interview was an ‘up close and personal’ with Frank sharing a little of his life story.  He talked about growing up as a son of a Church of Christ minister who moved with his family many times to when he eventually found his way to Ballarat. Frank spoke of his recording of Christian Good News radio spots that were aired on 3BA, he has been a Sunday School teacher and conducted a small orchestra at York Street Church of Christ

Frank was also presented another award a framed gold record from the management of 3BA for notching up 20 years with the current broadcasting company. However, from has been on radio since 1968 and even earlier where he started in Hamilton. Well Done from Frank on both awards. 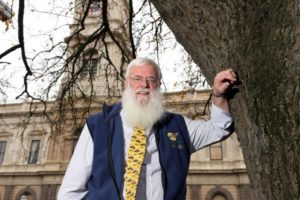 Graeme Kent (OAM) speaking by phone told of his inspirational work of transforming lives more recently in Nepal with Aussie Action Abroad of whom is the director. He will be going on his 30th trip to the 2015 earthquake devastated nation over the school holidays.

Born and raised in Ballarat Graeme told of his work as a youth worker with the YMCA, his family life and what led to his award.

Graeme has seen a thousand lives transformed  through the Duke of Edinburgh Awards for 16 years and in 2011 founded Aussie Action Abroad.

As Duke of Edinburgh Awards chief executive officer Mr Kent has accompanied over 1000 people to Nepal. A single mother and drug addict returned from a trip to Nepal “transformed” and now heads up health education for women’s health in Afghanistan’s capital Kabul, he said.

“I was inspired by the people of Nepal who were happy to share their nothingness and that was the thing that blew me away, they would bring down an apron full of oranges, happy to share that because that was all they had to share,” Mr Kent said.

“One is the contribution we make to the lives of people in Nepal, but I’ve had the opportunity of working with over 1000 people to take to Nepal, most of whom have come back changed people.”