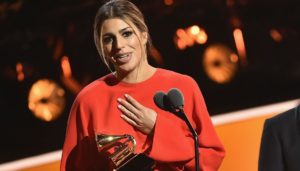 Brooke Ligertwood (Fraser) is part of the ‘core leadership team’ for the Los Angeles branch of Hillsong Worship; recently accepted the Grammy award for Best Contemporary Christian Music Performance/Song for ‘What A Beautiful Name’,.

She’s been writing worship songs alongside her more mainstream hits since 2005.

While much of the music she has released under the name Brooke Fraser contains Christian themes and imagery, her work with Hillsong allows her to fully express her faith.

“In some ways church songs are the ultimate pop music,” she says.

“Pop music is music that everyone can connect to and get on board with, and that’s really the same with worship music.”

It was “a crazy deal and a great honour” to win a Grammy for a song she and fellow songwriter Ben Fielding originally hoped might help members of Hillsong’s congregation.

Even being nominated was surreal, she says.

“It was genuinely something that had never occurred to me as a possibility.”

‘What A Beautiful Name’ has more than 100 million views on YouTube, a fact Brooke was charmingly unaware of.

After 15 years of songwriting success, New Zealand born Brooke Ligertwood (Fraser) was awarded Best Contemporary Christian Music Performance/Song for ‘What A Beautiful Name’, which she co-wrote and performed for worship group Hillsong.