ARTISTS HAVE BEEN CREATIVE DURING COVID19

Over the past several months Aussie and overseas artists have been using the lockdown to be creative online as well as writing and recording new music. New releases continue to freshen the airplay from so many of our favourite artists.

Following a lengthy hiatus from the spotlight, during which time St. James married and gave birth to two children, she was asked by her brothers—GRAMMY®-winning duo for KING & COUNTRY—to perform a brief set at one of their concerts. Although apprehensive to take the stage again, St. James agreed.

Co-written by St. James with North Point Worship’s Seth Condrey and Heath Balltzglier, “Battle Is The Lord’s” is an offering of worship to the God who protects, the song delivers a timely reminder of Who is ultimately in control.

“The message is so relevant to what the world is dealing with right now,” St. James says of “Battle Is The Lord’s.” “The heartbeat is that the Church can sing this song, and people can be pointed to the fact that God is in control. I think in this time, it’s so easy for all of us to fear, but He’s calling us to a place of deeper trust.” 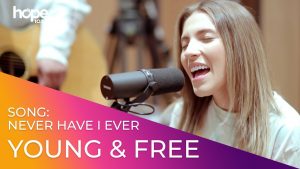 Young & Free releases their third single of 2020 with “Never Have I Ever,” hot on the heals of “Best Friends” and  “Every Little Thing” earlier this year  Both songs are receiving airplay across Australia for the band.

Featuring lead vocals from Young & Free’s Karina Wykes, “Never Have I Ever” is already a crowd favorite in Hillsong’s youth ministry. The song emphasizes God’s love and kindness for us, and the restored promise of peace for those who trust in Him.

“We‘re beyond excited to release our latest single!,” says Young & Free’s Laura Toggs. “With the cheeky title, ‘Never Have I Ever’ puts a new spin on a familiar phrase and a chorus that’ll be stuck in your head after the first listen.”

“There is no counterfeit for the love we’ve found in Jesus,” adds Toggs. “It’s a love that is SO GOOD, so trust-worthy, and how could we ever get over its transformational power in our lives. Our prayer is you will enjoy this song as much as we do.”

Young & Free continues to play an integral role in reaching this generation for Christ with their revamped contemporary approach. Since forming in 2013, Hillsong Young & Free has released three highly successful albums and more than 20 singles, acquiring over 459 million YouTube channel views and 1.2 BILLION global career streams (with a 700,000 plus global unit career consumption). With a combined social following of 3 million plus fans, Young & Free has seen seven No. 1 career singles and 10 Top 5 singles at Hot AC radio. Their debut album “We Are Young & Free” landed in the Top 25 on Billboard 200 while “Youth Revival” garnered the group its first-ever GRAMMY® nomination for Best Contemporary Christian Music Album (2017).